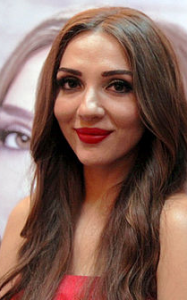 In its host year Azerbaijan will be represented at the Eurovision Song Contest by one of its strongest artists – Sabina Babayeva.

Striking but gentle, smooth yet powerful, emotional and appealing, Sabina speaks to the world through her songs and music. She has amazingly strong and groovy vocals. Her skills and talent are empowered by outstanding artistic charisma.

It has been her long-term goal to represent Azerbaijan at the Eurovision Song Contest, especially now that it is being held in her hometown of Baku. She has previously applied for and participated in National selection, including last year.

This year, Sabina won her right to represent her homeland in the final of Europe’s biggest and most favorite music event.

Sabina was born on December 2nd, 1979 in Baku. It was her mother – a professional pianist – who introduced her little girl to the world of music.

Sabina took singing far beyond a simple hobby, and it has become her world and soul. There are no weightless songs as each tells the stories and emotions from Sabina’s life not by hearsay because music has been in her life forever.

She graduated from the Asaf Zeynally College of Music with a degree in vocal arts, and since then has participated in many song competitions both in her country and abroad. In addition to all her musical talents, Sabina also holds a university degree in law.

Her first big victories happened in 2009 when she won the grand-prix at the young performers contest Amberstar in Latvia, as well as the grand-prix of the Slavic Star Contest in Russia.

Earlier Sabina found success in many other festivals, for instance, in 1999 at the Baku city song contest “The Wave”, as the best performer of a foreign song.

Sabina is a powerful singer with huge experience in jazz, soul, and pop music.

Azerbaijani participant at the Eurovision Song Contest 2012 Sabina Babayeva and her team presented today the music video for this year’s entry song When the Music Dies.

“There is no special script written for this video, – Sabina explains. – We have decided to bring emotions only. Music and lyrics will speak for themselves with all their power. When the Music Dies is a complete life story told within 3 minutes!”

Sabina will sing When the Music Dies during Eurovision Song Contest 2012 final on May 26th in Baku.