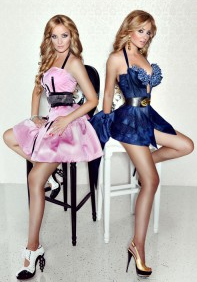 Daniela and Veronika grew up joined at the hip. They attended the same schools and had a shared dream of becoming an international pop duet. Although their love of music was innate and a passion that couldn’t be easily thrown away, at the completion of secondary school, the girls decided to attend the Comenius University of Management. The TWiiNS formed a joint venture and released four albums for which they were awarded three Golden and one Platinum record.

The girls went on to host their TV show “Hitbox” for four years on TV Markiza. In the meantime, they also made their acting debut playing leading roles as Tereza in the musical “Rebelove” showcased in Prague’s Broadway Theatre and Bratislava as well.

At the end of July, TWiiNS moved to Los Angeles which became their new home, and they started working on the international version of their album whose release is planned for winter 2011.