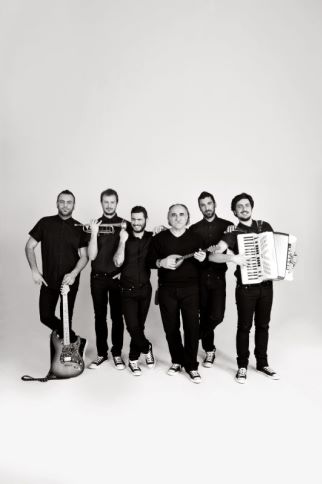 The group Koza Mostra has got together with the popular rebetiko singer Agathon Iakovidis to perform the song Alcohol Is Free.

Ilias Kozas: Lead Singer
As the lead singer of the band Cabaret Balkan, one of the best Greek Balkan Bands, in their most creative period. Kozas had a restless mind with many significant collaborations, and he sought a more personal way of expressing himself. He realised his goal by forming the band Koza Mostra, which became one of the most famous Balkan, ska bands in Greece.

Agathon Iakovidis: Lead Singer
Agathon Iakovidis is devoted to rebetiko music, loyally serving it since 1973, refusing to sing any other –even more popular- styles. He is a keen collector of vinyl records of rare rebetiko recordings. In 1977, Iakovidis created the Rebetiko band of Thessaloniki and he released two records. In 1981 he moved to Athens, where he worked with famous musicians such as: Kostas Papadopoulos, George Koros, Vassilis Soukas, Lazaros Koulaxidis, Nikos Filippidis, Nikos Chatzopoulos and many others. He has toured all around Greece, Europe and USA.

Christos Kalaitzopoulos: Accordion
Born on February 22nd, in Ptolemaida, Northern Greece. He started studying accordion with Aleksandar Tchuev. He has twice won the first prize in the Greek Accordionists competition and once the second prize at Star Ways, Kragujevac. Co-founder of the group “Los Mujeros” he participated at a very young age in several gigs such as Schoolwave 07, 08, 09. Worth mentioning are his appearances in Rockwave 2008 supporting Manu Chao and Patti Smith and in Ojos de Brujo and Tonino Carotone concerts.

Alex Archontis: Drums
Alex Archontis was born in Thessaloniki, on May 23rd, 1984. In 2005, he joined Cayetano’s live band and performed all over Greece. Succeeding the tour with Cayetano, he joined the band Emigre as a session musician and he participated in the recordings of three albums. Finally, in September 2011 he met with Ilias Kozas and joined the newly formed band Koza Mostra.

Stelios Siomos: Guitar
Stelios Siomos was born in Thessaloniki, on December 16th, 1980. He discovered his passion for music at a very young age and he formed his first band James Down playing soul, funk music and participating in local gigs. Further down the road he joined Koza Mostra where he performs as a musician.