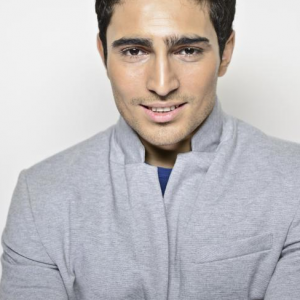 Farid, has effortlessly proven he is one of the finest vocalists Azerbaijan has produced in years. To win the national final Farid provided a touching performance of the song Hold Me. This is a strong romantic ballad, which was interpreted powerfully yet very sensitively, by Farid. The composition was a huge pretender to the throne, as it was voted by many countries. It seems that Canadians fell hard for Farid and his song because according to Canadian no deposit casinos and online bookmakers, Hold Me was an absolute favorite. Click here for more details. Hold Me is composed by Dimitrios Kontopoulos, who previously produced Eurovision songs for Ani Lorak, Sakis Rouvas and had 27 number one hits in Greek national airplay charts.

Hi, this is Farid and I need your help.

Thanks to all of you for support in the national selection to represent Azerbaijan in Eurovision 2013.

Wow! What an honor!

However, the road from Baku to Malmö, Sweden is long and I can’t make it without you.

We’re already one-up since Dimitrios Kontopoulos chose me to premiere his great composition, Hold Me.

I’ll be practicing in order to hone my performance but I’ll be back here every day to draw inspiration from fan support.

When I take the stage on May 16 in the second Semi-Final, I hope to feel the strong wind of your support lifting my voice to new heights.

Get on-board, we’re Malmö-bound and I can’t make the trip without you!

The talented singer Farid Mammadov will represent Azerbaijan at the Eurovision Song Contest in Malmö with the song Hold Me. After one of the most competitive national finals of this season, Farid has been chosen from ten finalists to become the first ever solo male singer to compete for Azerbaijan on the Eurovision stage.

There is no doubt that Farid has charmed the Azerbaijani audience over the last few weeks with both his considerable musical talent and smoldering good looks. As Farid, age 21 has effortlessly proven he is one of the finest vocalists Azerbaijan has produced in years. To win the completion, Farid provided an emotive and sensitive performance of the song Hold Me. This is a strong romantic ballad, which is interpreted powerfully, yet is sensitively by Farid. Hold Me is composed by Dimitrios Kontopoulos, who previously produced Eurovision songs for Ani Lorak, Sakis Rouvas and had 27 number one hits in Greek national airplay charts.

Farid was delighted to win Azerbaijan national final. Although it was his dream to sing for Azerbaijan, he previously had never participated in national selections as he felt like the time was not right for him. Over the last few years, he has developed his singing ability to the point where he was ready to succeed. This proved to the right decision for Farid as not only did he win the jury vote in the final, he also gained the highest number of televotes from the public during the qualifying rounds.

This competitive spirit is also shown in Farid’s strong passion for the port. He enjoys participating in freestyle wrestling which is regarded as the national sport of Azerbaijan. There is no doubt that he inherited this sporting abilities from his mother who was a silver medallist for the USSR in gymnastics and his father who used to be a successful judoist. Not to mention both parents are also into music, with Farid’s mum plays piano and his father used to sing and play keyboards in a rock band.

Farid’s professional music career began at the age of eight when he was asked by his vocal coach to sing I Just Called to Say I Love You by Steve Wonder at his very first concert. His performance was a huge hit and since then Steve Wonder has been a major influence on his musical development. Farid started writing his own song at sixteen. During the semi-final of the national selection, he performed his own song Gel Yanima (Come To Me). Not only is Farid a talented pop artist but also an accomplished Mugham singer which is a form of traditional Azerbaijani folk music and vocal art.

As many other finalists of the Azerbaijani national selection, Farid took part in the casting process for the music talent show Big Stage. The show is a unique international project which differs from numerous other talent shows by a concept of creating for young artists a very special artistic environment, where polishing one’s talent is much more important than just winning the show. This is where, at the creative campus of the show, Farid came to the attention of Dimitrios Kontopoulos the composer of Hold Me who was also involved in the production of the show together with an
international team of professionals from Azerbaijan, USA, the UK, Greece, Sweden, and Ukraine. Dimitrios was seeking a strong performer for his song and Hold Me was performed by Farid for the first time at the Big Stage final on March 9th.

Farid Mammadov will sing for Azerbaijan in the second Semi-Final of Eurovision 2013 on the 16th of May in Malmo, Sweden.