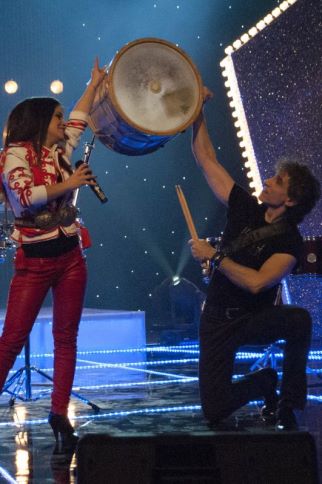 Elitsa Todorova Stoyan Yankulov are multi-talented musicians, bringing together the best in terms of vocals, styles, and instruments. They are famous especially for their innovative ways of combining traditional singing, percussions, and modern influences.

Elitsa Todorova was born on 1977 in Varna. She studied music, specializing in authentic folklore
singing and in percussions. She attracts the attention of both the audience and the critics with her
specific voice strong, deep-toned, clear and hardy, the tone-quality being one of beautiful and
rich ornamentation. She worked at the State Dance and Music Ensemble in Varna, in the choir The Mystery of the Bulgarian voices, and the Cosmic Voices of Bulgaria choir where she performed authentic Bulgarian folk songs, and compositions in Yiddish and Sanskrit.

She plays traditional percussion instruments in a most non-traditional way. The singer easily mixes traditional folklore with jazz, drum and bass, ethnic-motifs, classics, and spontaneous improvisation.
The result is fascinating. In her repertoire, Elitsa Todorova plays instruments like the tarambuka, drums, maracas, claves, old silver coins, shepherds chimes, horses bells, a magical thunder-wand, guiro, chimes, but of all musical instruments the best, in her opinion, is the human voice. Through combining authentic Bulgarian folk songs with the energy of percussions Elitsa Todorova presents in a most touching way the core, the potency and the emotional power of Bulgarian culture.

Stoyan Yankulov was born on September 10th in Sofia. At the age of eight, he started taking piano lessons. At the same time, he showed interest in percussion instruments. Since a young age, he was the base of musical bands as a drummer, and he eventually graduated majoring in percussion instruments. Yankulov plays with rock and jazz bands, with folklore ensembles and with jazz-rock and fusion bands.

Stoyan Yankulov has already won many highly-ranked prizes. He records jazz, pop, and ethnic music. This has significantly influenced his unique playing style. He manages to produce orchestral sound on percussion instruments. Sometimes the listener has the impression that there is more than one percussionist playing. The acquisition of other techniques from bass, piano or other instruments is useful in this process. For me to play means to communicate, Stoyan describes his very own style.

Elitsa and Stoyan have already performed together on the Eurovision Song Contest stage together in 2007, gaining the fifth place in the Final with Voda the best placing for Bulgaria to date.